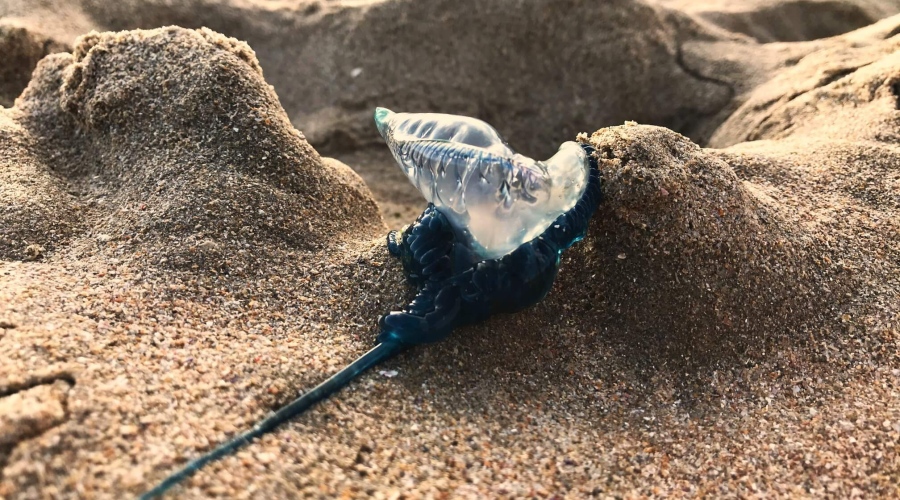 I dedicate my March blog to Mosaic Community Developments! An NPO who are committed to changing the lives of orphaned and vulnerable children in South Africa!*

I can still see the venom climbing up my leg. After scraping the long dangly, stringy organism off from my foot. The pain begins to spread and becomes unbearable. Your single-track thought at this point is how to diffuse the burning sensation that has hijacked your mind, sending throbbing signals throughout your entire limb. PAIN

This was my first encounter with a ‘Blue-Bottle’ otherwise known as the –
‘Man Of War’. By the way… it’s not an it but a THEY! Briefly explained: These evil sea creatures are actually a colony of four kinds of highly modified individuals which make up the armada of blue-ish tinted floating colonial organisms that get washed onto our beaches. (Just in-case you were wondering; Its naval reference gets its name from a gas-filled bladder which sits above the water and somewhat resembles an old warship at full sail).

When one of these little buggers sting you, its long tentacles releases thousands of microscopic venom-injecting capsules called nematocysts. On contact with the skin, they deliver a toxic chemical cocktail into its victim.

Over the past few weeks while campaigning for Mosaic Community Developments. A Non – Profit Organization focused on orphaned and vulnerable children in South Africa I came to mull over this memory. Let’s dive straight into the point – There is a massive percentage of kids who live in the townships who are exposed to a significant amount of trauma, all types of abuse and even criminal activity from an abnormally young age. These thoughts and actions that bombard their little brains like (Hiroshima bombers) with extreme violence and no prejudice deliver a venomous message into their lives. “They have no future and will always live in abject poverty, so what’s the point in trying to get out!” By this stage the toxicity has begun to set in.
Rigor mortis of the mind.

The children are clawing desperately to drown out the PAIN in their own way.
Each, a casualty of War. Like child soldiers they become detached from the outside world.

Mosaic Community Developments has been selflessly serving the neediest communities for over a decade and has 3 active Centres; Paarl Valley (Wellington), Port Elizabeth and Potchefstroom. The staff have been working tirelessly to remove the stigma of hopelessness that has been embedded into their hearts from the time they were born. Statistics indicate that orphaned and vulnerable children will leave school in Grade 9, with little to no prospects for employment, perpetuating the poverty cycle with little hope for a better future.

Not only has Mosaic developed job creation initiatives to provide dignified work opportunities to the moms so that they can put food on the table for their foster kids but also access to after – school programmes at their Community Centres such as music lessons, choir, fitness and talent development programmes for the orphaned and vulnerable children.

The comparison that I am sketching in this blog to the ‘Man Of War’ and orphaned kids is the disease of hopelessness and the legions of thoughts that like a fleet (armada) of organisms that wash ashore and attack their minds, spreading lies (venom) that try and prevent them from believing that they can have a future outside of their current circumstances. Mosaic is taking a stand in these communities, defending the orphans and forging a future where they know they are loved and cared for.

On the 11th April, 25 people will be running the 2Oceans Half Marathon to raise funds and campaign to create awareness for Mosaic Community Developments.
By donating funds, time or commitment to Mosaics orphan care model you will be providing hope to an otherwise forgotten generation.

MAY THEIR FUTURE BE BRIGHTER THAN THEIR PAST.

It took me a full 3 seconds... END_OF_DOCUMENT_TOKEN_TO_BE_REPLACED

I finally finished the last chapter. I... END_OF_DOCUMENT_TOKEN_TO_BE_REPLACED

For the past two years, this story... END_OF_DOCUMENT_TOKEN_TO_BE_REPLACED

From the very first moment I heard... END_OF_DOCUMENT_TOKEN_TO_BE_REPLACED